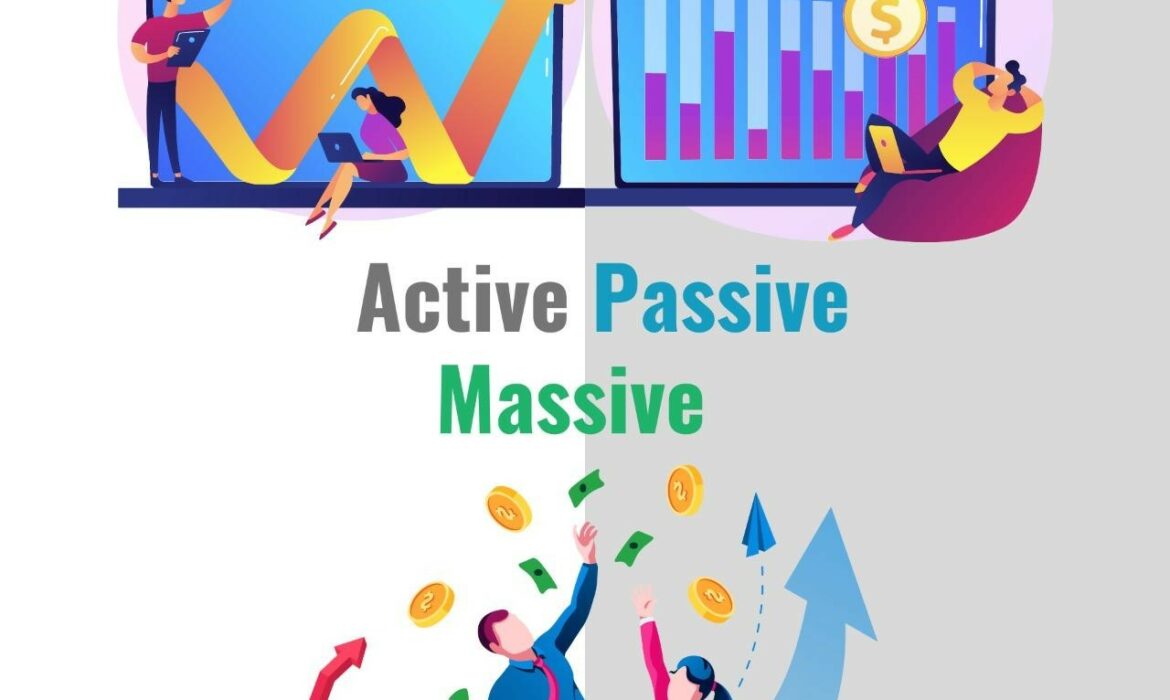 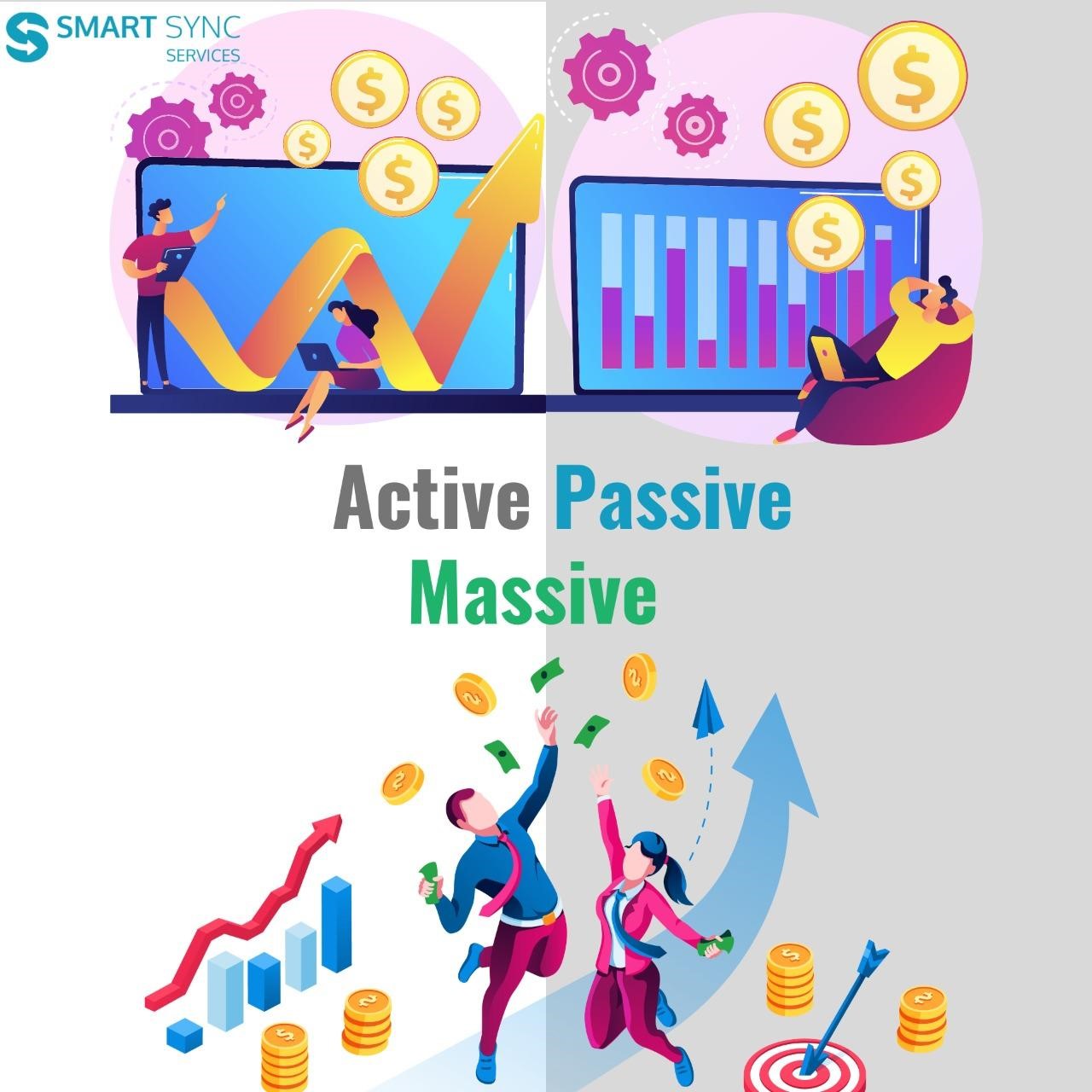 There has been a massive debate on active vs passive investing. We, at SSS, are both active and passive at the same time. While we invest in direct stocks that make us active, our style is passive. You may know more about it here. But this post is not about our style of investing. It is about something bigger.

India Vs USA in Passive Funds

On 2nd January 2023, Lalit Keshre, co-founder and CEO of Groww ( one of the top 3 new-age broking businesses in India) tweeted this and we replied to his tweet. 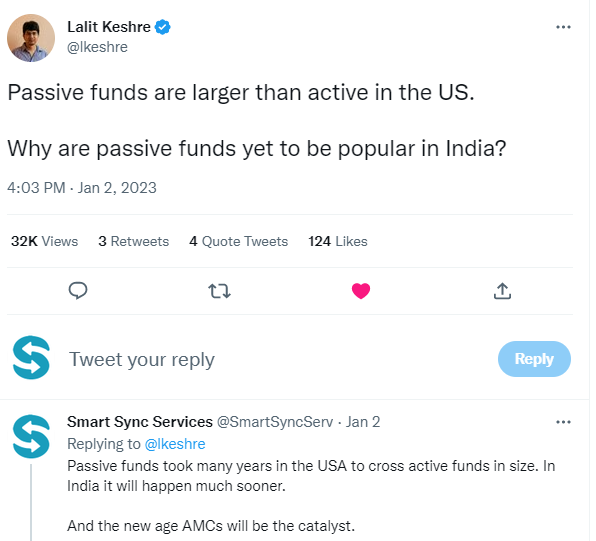 There were a lot of diverse views expressed by different participants. You may read about them here. I am not going to attack any of them personally. However, I was surprised to see that the majority of people came in defense of either active or passive strategy only on the basis of returns. I think this debate on Active vs Passive needs to be far more nuanced than only comparing the returns of the two styles. Hence, this post.

Before going ahead, let me just simply define active and passive investing strategies so that we are all on the same page.

What are Active & Passive Investing?

Active investing, as its name implies, takes a hands-on approach and requires that someone act in the role of a portfolio manager. The goal of active money management is to beat the stock market’s average returns and take full advantage of short-term price fluctuations.

If you’re a passive investor, you invest for the long haul. Passive investors limit the amount of buying and selling within their portfolios, making this a very cost-effective way to invest. The strategy requires a buy-and-hold mentality. That means resisting the temptation to react or anticipate the stock market’s next move.

And just google Active Vs Passive and you will get tons of videos and articles comparing only the returns and past performances.

ChatGPT provides some more context to it.

I simply asked ChatGPT: In India which is better? Active & Passive? 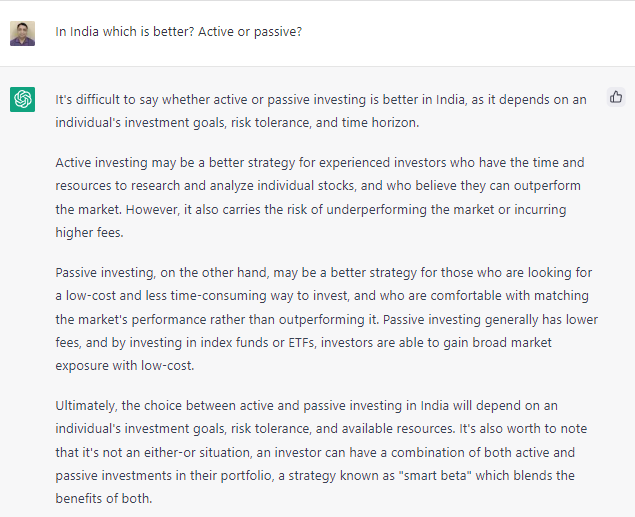 This was very helpful. And I didn’t stop here. I went ahead and asked a more penetrating question.

What do investors in India generally forget when they compare active and passive investment strategies?

And I was mighty impressed with this answer. 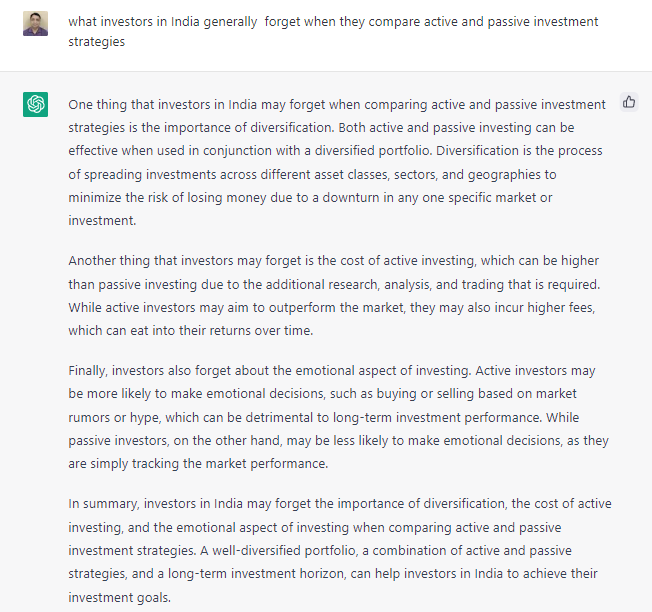 Evolution of Passive Investments in the USA

But before we go deep into passive investing’s journey in India it pays to look at the USA and understand how it evolved there.

The following three events sowed the seeds of passive investing in the USA.

And after 22 years of being in the market, this is how passive investments were stacked against the giant active pool in the year 1998.

And it took another 20 years for passive funds to overtake active funds.

Now if you compare that with the current situation in India, you will appreciate that passive funds in India are already on a faster track.

So, if you connect the dots, you see that after the first 23 years, passive funds in the US formed 10% of the total funds compared to 15% in the case of India. So, India has already begun well.

And there are other growth levers that tell you that India is going to see a tsunami of inflows in the passive category. Here is one such lever:

I couldn’t find the original source of the above SEBI circular, but as Neil Borate is a responsible professional and a deputy editor at Mint, I trust that this is true.

The launch of passively managed ELSS schemes after closing actively managed schemes for subscription is a big step towards that tsunami.

And while there are a lot of claims being made that active funds provide better returns than passive funds, I would urge you to focus on the current data rather than any random opinion on social media.

Where is the alpha?

However, just because I am an active investor, doesn’t mean I will turn a blind eye to facts.

Passive Funds are going to be massive in India in times to come. And now let me tell you how the new-age AMCs will be a catalyst.

Let’s start with this 2019 tweet by Kunal Shah, founder of Cred, one of India’s most highly valued start-ups.

To drive home my point, I will just replace the word “content” with the word “customer”.

“Customer is King. Distribution is God.”

Let’s understand this with an example.

Which company on earth probably got the above message earlier than anyone else?

My answer would be Amazon.

It started as an online bookstore. Built an online library of millions of books. Got tons of customers on board. And then just kept on adding other products one by one. From a bookstore, they became an everything store.

The new age fintech businesses are working on a similar model. Of course, their universe is not as large as Amazon, but large enough.

The new age discount brokers are the ones who are growing at breath-taking speed in terms of the number of new Demat accounts.

Also, the new age current and upcoming AMCs like Navi AMC, Zerodha, Groww & Capitalmind are tech-oriented platforms that own the distribution of millions of customers.

For them, by design, passive strategies work much better due to convenience, cost, and scale.

Now, I am not saying that soon you will see passive funds overtaking active funds. No, it would probably take much longer. And we at SSS believe in Don’t Predict, Prepare.

But for the reasons stated above, my view is that it might take lesser time than what we saw in the case of the USA.  Don’t forget that we have a lot going for us which was not in the USA in the past:

While you and I focus on the stock market and individual stocks, do we realize that a massive amount of wealth in India is still in FDs, Real Estate & Gold? And do they care about the prospects of individual businesses like Reliance, L&T, HDFC, or TCS?

No. They are more focused on safety, convenience & trust.

Passive funds will provide them with just that.

And also, a little higher return.

And new-age AMCs will be the catalyst.

Thank you for reading.

P.S. If you like our research and wish to deep dive more, you may download our MissioN SMILE app on your Android phone. (iOS App coming soon  😊) Lots of free sessions on investing for you to explore and learn.  😊